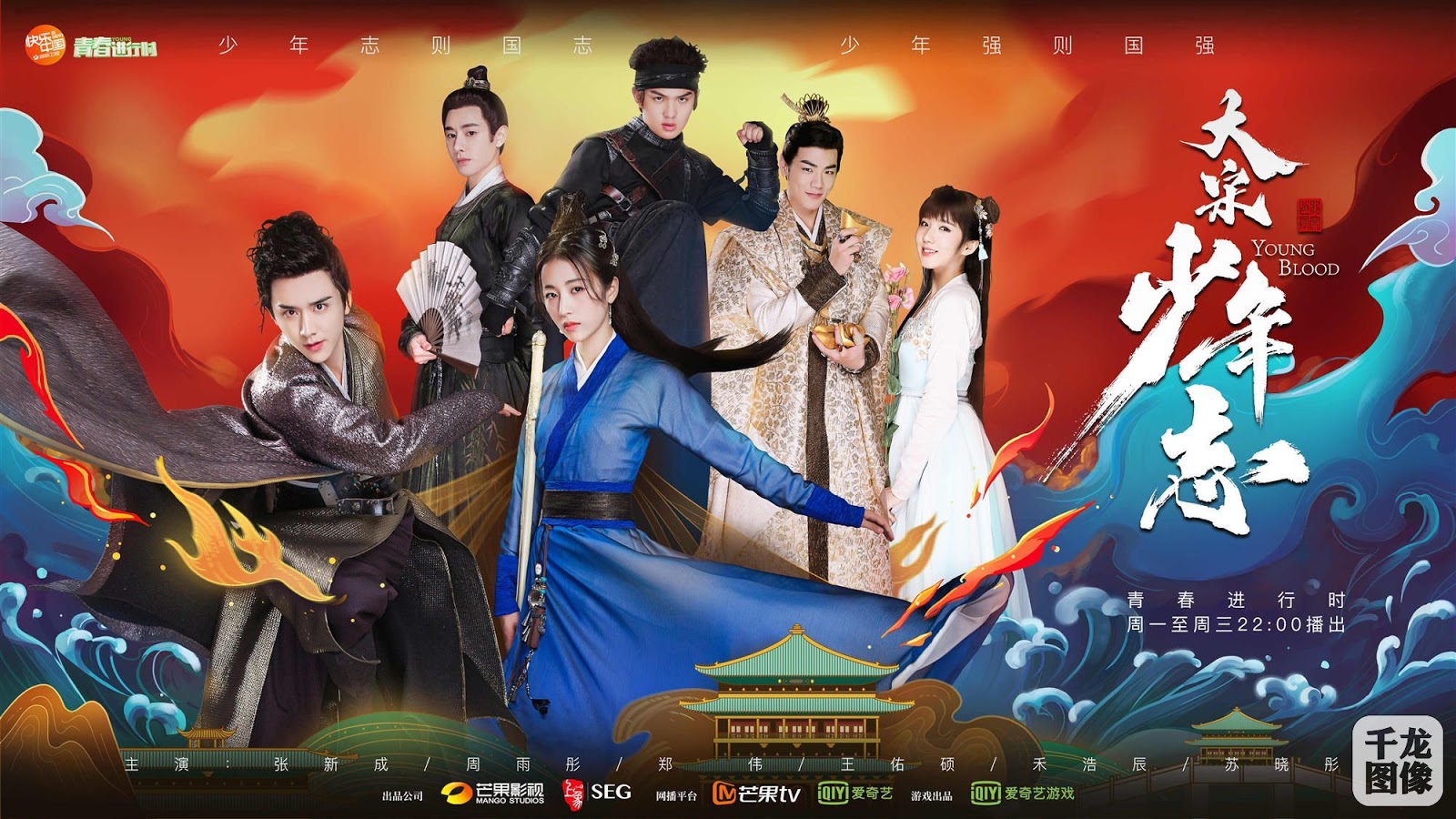 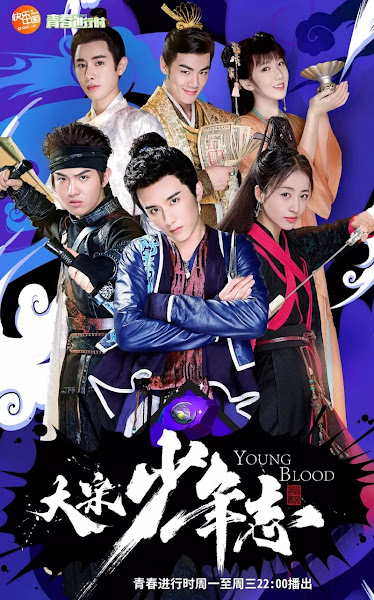 A story that takes place during turbulent times when the Northern Song and Western Xia were at war. Six young individuals undergo training to becomes spies in order to defend their country.
During the reign of Emperor Renzong of Song, the prosperous glimmer of Northern Song is clouded by looming danger. Spies have infiltrated the capital to gather intelligence and to weaken the political clout of the imperial family. In order to end the war, a group of young heroes undergo rigorous selection and training. Yuan Zhongxin (Zhang Xincheng) is crafty and intelligent. Zhao Jian (Zhou Yutong) is beautiful and astute. Xiao Jing (Su Xiaotong) is against killing all forms of life. Wang Kuan (Wang Youshuo) is someone who never lies. Xue Yang (Zheng Wei) is a man who keeps to himself. Wei Weinei (He Haochen) has a liking for beautiful women. Despite their disparate backgrounds and personalities, the six begin to grow as a team through numerous life and death missions.

Main cast
Zhang Xin Cheng as Yuan Zhongxin, Second son of the Yuan family, who was born to a concubine. He has grown up in the streets since young, and is adept in trickery. He has great observational skills and a witty mind. He joined the Secret Cabinet to assist his brother. He likes Zhao Jian.
Zhou Yu Tong as Zhao Jian, Young lady of noble birth. She is beautiful, intelligent, independent and capable. Her dream is to prove that girls can be independent and build their own career. She was engaged to Wang Kuan, but falls for Yuan Zhongxin.
Wang You Shuo as Wang Kuan, A young master of noble birth. He has a upright character, strong sense of moral justice and is known for never lying. He possesses strong memory skills and a talent for imitating handwriting. He is close friends with Yuan Zhongxin and joined the Secret Cabinet to assist Yuan Zhongxin. He was engaged to Zhao Jian, but falls for Pei Jing.
Zheng Wei as Xue Ying, A man who was born into a lowly background. He is reticent, sensitive and rash. He has a sense of inferiority due to his lowly background. He joined the Secret Cabinet to help his family escape from slavery.
Bruce Hung as Wei Ya'nei, Son of the Grand Commandant. He is loud and brash, and initially joined the Secret Cabinet to look for girls. However what lies deep in his heart is a sense of justice and love for the country, as well as a desire to prove himself.
Su Xiao Tong as Pei Jing, Descendant of the Bo Hai tribe. She is adorable, blur but determined. She feels insecure due to her lack of outstanding talent, but meeting Wang Kuan gives her a sense of self-importance.
Supporting cast
Tong Fan as Lu Guan'nian, principle of the Secret Cabinet. He was later revealed to be colluding with Han Duanzhang to bring chaos to Song and Liao Dynasty.
Gao Zi Qi as Yuan Boqi, Yuan Zhongxin's brother. Known as the "God of War" for his outstanding martial arts and battle skills.
Dong Li Wu You as young Yuan Boqi
Mark Lo as Han Duanzhang, underground supervisor of the Liao Kingdom's Northern Court.
Li Xiao Chuan as Lao Zei, a mischievous puppeteer who has links with Yuan Zhongxin. Later becomes an instructor of the Secret Cabinet.
Sui Yong Liang as Liang Zhu, head of the Imperial Troops. An instructor of the Secret Cabinet. He dislikes Yuan Zhongxin due to his brother and often picks on him.
Yang Ping You as Wei Zhuoran, Wei Ya'nei's father. Grand Commandant of Song Kingdom. He was secretly send to the borders to hide the truth of his death.
Guo Wei as Military Commander Yue, a general and an instructor of the Secret Cabinet.
Gong Si Le as Liu Sheng, leader of the Fifth faction of the Secret Cabinet. He is arrogant and looks down on everyone in Seventh faction except for Zhao Jian. However, he is an upright person.
Ran Wei Qun as Lu Jian, Grand Commandant and Political Advisor
Wen Jun Ting as Ma Shan, Wei Zhuoran's confidante.
Chu Jian as Xue Ying's father
Ai Ping as Xue Ying's mother
Guo Jun as Wang Bo, Wang Kuan's father
Tian Kai as Instructor Zhang, instructor of the Secret Cabinet. He was later replaced by Liang Zhu.
Prison Arc
Yan Xiao as Ding Er, a general of Xia Kingdom who disguises as a prisoner in Song. He likes Zhao Jian.
Feng Qi as Su Xingqiao, leader of the ship workers who was once the young mistress of a rich family.
Kou Ming Tao as Feng Zhu, a spy of Liao. He was in love with Su Xingqiao.
Wang Jun as Prison Warden
Han Yan Da as Prison Warden
Wang Wei as Lecturer
Crossbow Maker Arc
Yang Shan as Chen Gong, a famous crossbow maker who is hunted by many due to his talents.
Fan Xiao Ming as Liu Yong, head of the Black Jack troops. He was later revealed to have betrayed Song Dynasty.
Li Yun Ao as Xi Fengyun, a spy of Xia Kingdom.
Ma Han as Yun Niang, a lady boss of a restaurant. Xi Fengyun's lover.
Xu Zhe as Chen Gong's sister
Liao princess and Performance Troupe Arc
Liu Mei Han as Yun Ni, Princess of Liao Kingdom.
Luo Rui Hua as Xiao Hua, Yun Ni's personal attendant who is fiercely loyal to her.
Xu Wei Dong as Huo Yuguang, a spy of Liao Kingdom.
Hou Si Zhe as Tian Hu, a guard that befriended Zhang Xincheng at the troupe.
Li Peng Fei as Di Jiang, Liu Sheng's close friend. He tried to kill Wang Kuan as he thought Wang killed Liu Sheng.
Bin Zhou
Yang Hong Wu as Prince Zhao, Zhao Jian's father.
Wang Zheng as Qin Wuya, Grand Commandant of Wu Wei Army
Luo Ting as Mozang Baoli
Yu Zi Kuan as Zhou Xuan, assistant commander of Bin Zhou. Lu Guannian's friend. Betrayal of Song kingdom.
Wang Tong as Lin Mosheng, leader of Bin Zhou commerce party. Zhao Jian's suitor
Wang Sheng Kai as Li Zhen, a guard of Lin Mosheng. He is secretly under the control of Mozang Baoli.
Xu Bin as Qin Wuya's wife
Jin Wa as Xiao Hu, Qin Wuya's son
Liu Shi Jie as Xiao Wang, a little beggar